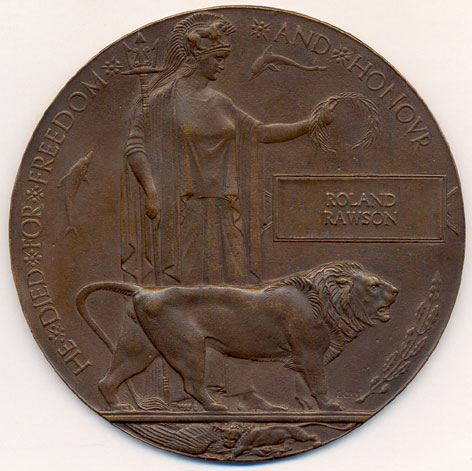 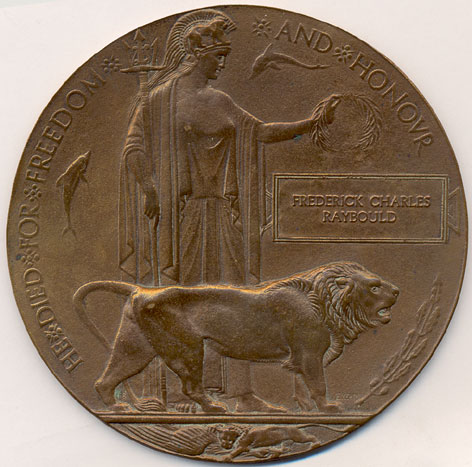 The CWGC record this man as "Frederick Raybould" only. Investigations show that he enlisted as "Frederick Raybould" omitting his middle name, & stated he was born in Lye, Worcester 8/4/1882. His birth certificate confirms his true full name was "Frederick Charles Raybould" & his true date of birth was 29/7/1879. Raybould was too old to serve in September 1914 & took three years off his age to qualify to enlist. He was one of many men who enlisted "over-age", but one hears very little about them, overshadowed as they are by the 'boy' soldiers who enlisted underage

It is believed that Raybould's Next-of-kin provided his birth certificate to the Plaque issuing authorities & his full name was therefore cast in his plaque. They chose not to correct the CWGC record nor did they return any details to the CWGC for inclusion in the Arras Memorial Register. 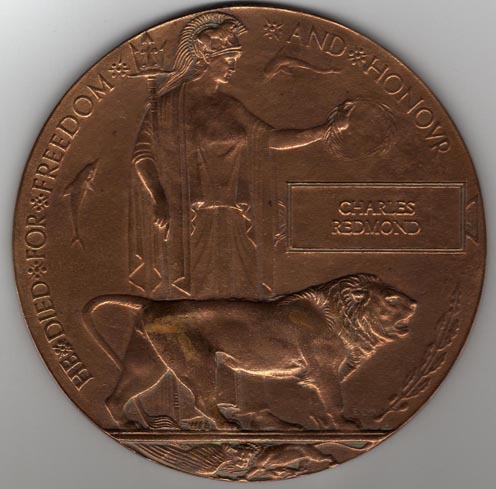 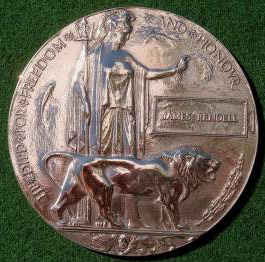 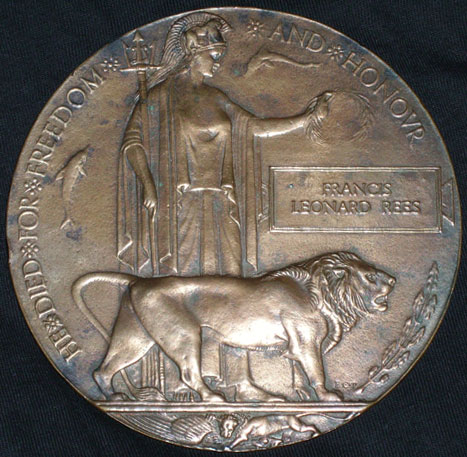 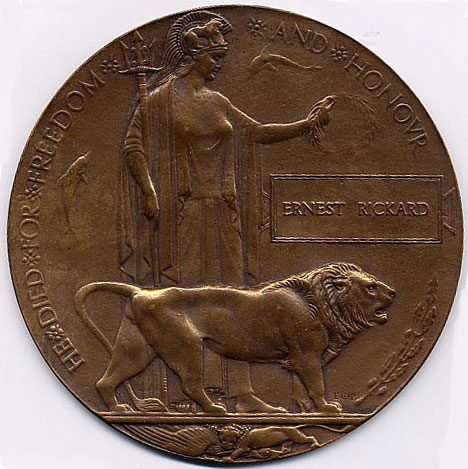 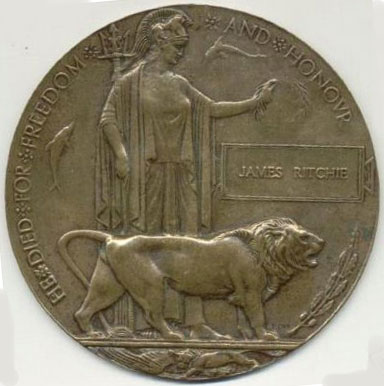 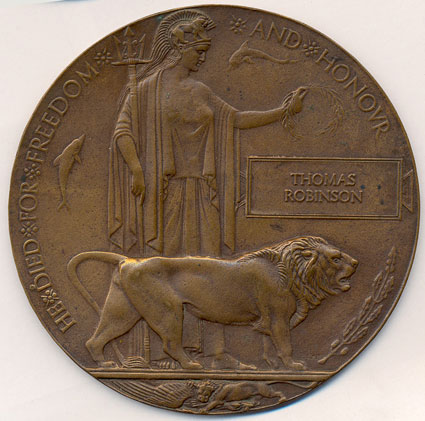 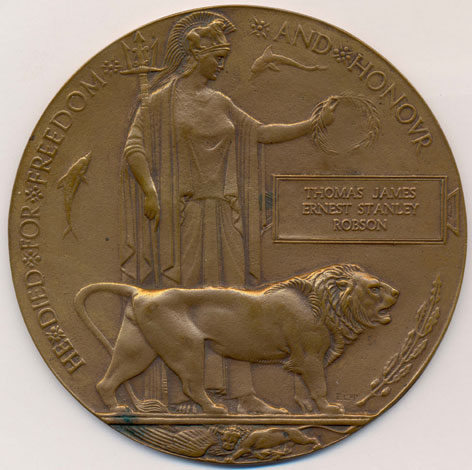 This plaque at first defeated attempts at identification. However, it was soon discovered that the CWGC list this man as "T.E.S. Robson", omitting his second initial "J" (they also incorrectly record his date of death as 27th May). As it happens, Sapper Robson also omitted his second forename on enlistment for reasons unknown. Below is his RND Index Card:- 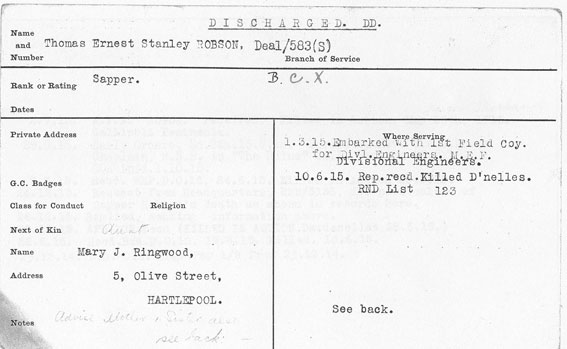 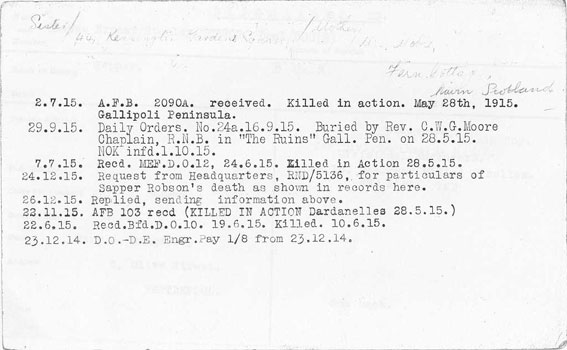 Confirmation of Sapper Robson's true name was obtained from his birth certificate which carries his full name "Thomas James Ernest Stanley Robson". This case proves that his Next-of-kin was able to have his Plaque cast with his full 'birth' name, probably by providing a copy of his birth certificate, & despite him having served as "T.E.S. Robson" only. 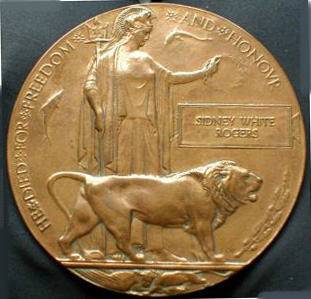 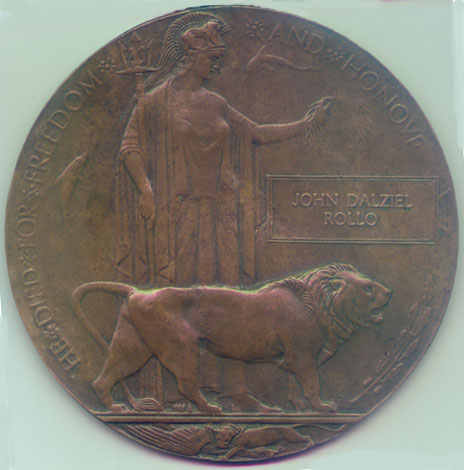 RND Roll of Honour gives:- Enlisted in the Durham Light Infantry 2/9/14 & transferred to RNVR 7/9/14. ; Howe Bn. K/188 7/9/14-8/6/15 DD.
CWGC incorrectly record his service number as "K/143"
Reported by Lieutenant J.F. Sutcliffe RM, Officer Commanding No.1 Company Portsmouth Bn. RMLI:- "Sir, I have the honour to bring to your notice the very gallant conduct of RFR 'A' Class PO/1239 Lance Corporal Robert Coubrough RMLI, which occurred under the following circumstances. On the afternoon of 8th June, Ordinary Seaman Edward Rowland RNVR, having been wounded & left for some days, about 30 yards in front of our trenches was seen to be moving in the direction of the enemy's line, & being mistaken for an enemy sniper, was fired upon & brought down. It was then discovered that he was one of our men. Lance Corporal Coubrough volunteered to bring him in & crawled out of our trench, under fire from snipers. He managed to reach him, when Ordinary Seaman Rowland was again hit & rendered helpless. Lance Corporal Coubrough then advised him to lie still & returned to the fire trench, telling him he would be brought in after dark. In the evening Lance Corporal Coubrough again volunteered to go out with a stretcher party & managed to successfully bring the wounded man in."
Born Westwood 25/8/1889. A Miner. Son of William and Mary Rowland, of 1 Sycamore St., Allendale Cottages, Hamsterley Colliery, Co.Durham. Resided with father. ; 1914 Star issued to father 9/7/19, V.B. issued to Father. 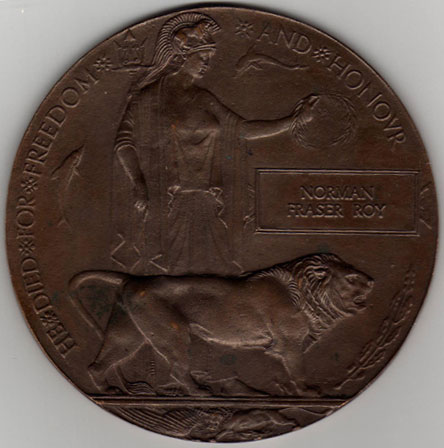 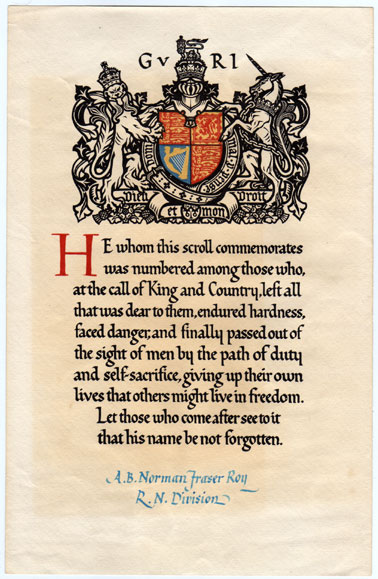 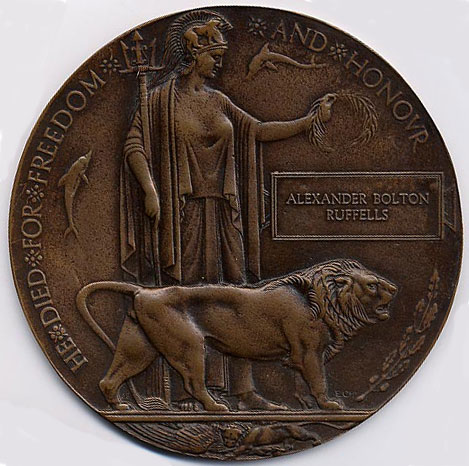