(The matters discussed in this article concern only the Naval personnel of the RND & not Army personnel attached to Naval Battalions or Royal Engineers serving with the RND Engineer Field Companies, 247th, 248th & 249th). 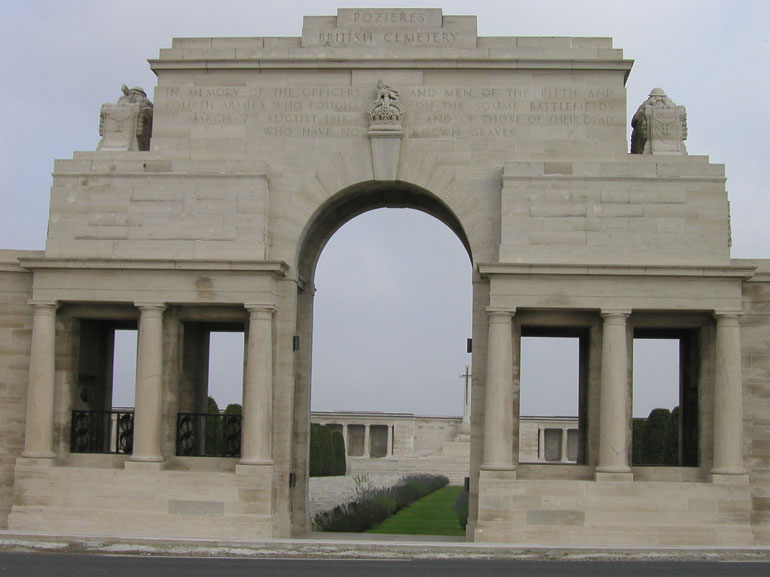 During the compilation of the RND "Roll of Honour" for WW1, it came to our notice that the names of those whose bodies were not identified or lost (termed as the 'missing'), are listed on three different memorials (Thiepval, Arras & Pozieres) for the six month period from Dec. 1917 to May 1918.

The criteria for appearing on a specific memorial should be quite simple: the date & location/sector of death. The following memorials are employed for the RND 'missing' during this period :-

The Thiepval Memorial commemorates those 'missing' in the Somme sector from July 1915 to 20/3/18.

The Arras Memorial commemorates those 'missing' in the Arras sector from the Spring of 1916 up to 7/8/18.

Below is the text from the Commission's Internet site regarding these three memorials:-

The Thiepval Memorial, the Memorial to the Missing of the Somme, bears the names of more than 72,000 officers and men of the United Kingdom and South African forces who died in the Somme sector before 20 March 1918 and have no known grave.

The Arras Memorial commemorates almost 35,000 servicemen from the United Kingdom, South Africa and New Zealand who died in the Arras sector between the spring of 1916 and 7 August 1918, the eve of the Advance to Victory, and have no known grave. A separate memorial remembers those killed in the Battle of Cambrai in 1917.

The Pozieres Memorial relates to the period of crisis in March and April 1918 when the Allied Fifth Army was driven back by overwhelming numbers across the former Somme battlefields, and the months that followed before the Advance to Victory, which began on 8 August 1918. The Memorial commemorates over 14,000 casualties of the United Kingdom and 300 of the South African Forces who have no known grave and who died on the Somme from 21 March to 7 August 1918.

Our attention was first drawn to the Pozieres Memorial, as we could not reason why the RND 'missing' only appear on Pozieres from 6/4/18 onwards (this is discussed later). Before this date, the RND 'missing' appear on the Arras & Thiepval Memorials. However, this question has led to the exposure of much greater problems with commemorations dating back to December 1917.

From Arras to Thiepval to Arras.

In mid-December 1917 the RND arrived in the sector west of Cambrai known as "Welsh Ridge" after their participation in the 'Second Battle of Passchendaele' in October & November 1917. They were to remain in this sector for the next three months, until pushed back west to the Somme by the German Spring Offensive which began 21/3/18.

This begs the question "Why change from Thiepval to Arras between 16/2/18 & 5/3/18?" The RND had not changed their sector of operations & were still holding the line in the Cambrai sector.

We cannot find any reason for this change over from the Thiepval to the Arras Memorial, nor the reason why Thiepval was employed at all. The Cambrai sector cannot have been correctly judged as 'Arras Sector' for the Battle of Cambrai in November 1917, then changed to 'Somme sector' Dec. 1917 to Feb. 1918, before reverting to 'Arras sector' from March 1918 on.

We therefore must conclude that all 175 RND men listed on the Thiepval Memorial from 14/12/17 to 16/2/18 are in error & should rightly be listed on the Arras Memorial.

From Arras to Pozieres.

According to the Commission, the Pozieres Memorial commemorates those who died on the Somme between 21/3/18 & 7/8/18. However, this statement of requirement/qualification does not sit well with the known historical facts.

When the Germans attacked at Cambrai 21/3/18, it was the beginning of a seven day retreat for the British, back to the old Somme battlefields of 1916, some 30 miles west. Nobody died "on the Somme" 21/3/18; in fact the retreat only reached "the Somme" 25/3/18. This is only a minor point, but nonetheless misleading to the historian. A modified statement "those who died during the retreat from Cambrai & on the Somme between 21/3/18 & 7/8/18" would be more accurate.

In memory of the officers & men of the Fifth & Fourth Armies who fought on the Somme Battlefields 21st March - 7th August 1918 & of those of their dead who have no known graves.

The RND were part of the Fifth Corps, Third Army, from December 1917 until early August 1918. According to this inscription, the RND should not be listed on Pozieres at all! However, we think the opposite to be true &, like many other things, the inscription is inaccurate & in error.

We conclude that the 250 RND 'missing' listed on the Arras Memorial who died between 21-27/3/18, should be listed on Pozieres, despite the inscription.

Who was J. Donoghue?

Taking a closer look at our records for the Pozieres Memorial, we found that only 55 RND 'missing' appear on the Memorial. However on inspection of the memorial itself, we counted 57 names (see below).

The first turned out to be:- PO/2417/S Pte. Oliver Wilks RMLI, 2nd RM Bn., KIA 6/4/18. He is buried at London Cemetery & Extension, High Wood, Longueval. It is believed that his body was found after the Memorial was built (he was originally listed as "Wounded & Missing") & his name has been overlooked as remaining on the 'missing' panel for the RMLI at Pozieres.

The second man defeated our initial attempts to identify him (J. Donoghue). However, he was finally traced as:-

How he came to be listed on the Pozieres Memorial, we can only guess. The difference in the two surnames (Donoghue & O'Donoghue) may well have been the cause. 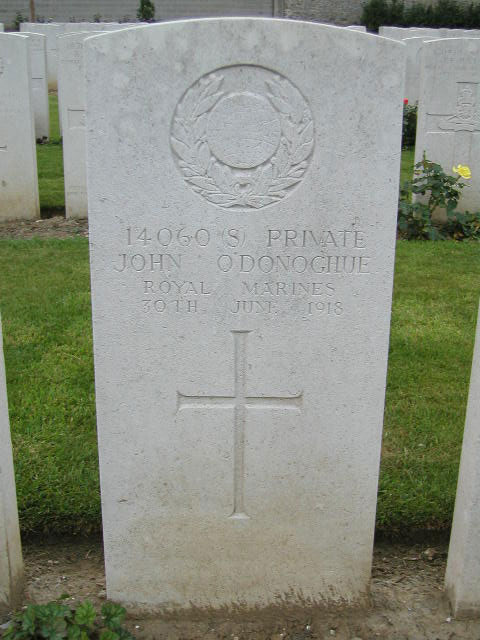 We should like to point out that this Headstone is also in error. It omits the "Deal" divisional prefix from his service number & makes no mention of the Royal Marine Labour Corps.

The Commission's current Internet database entry & an original 1922 Commission register both read :- 14060/S Pte. John O'Donoghue, Deal Battalion, Royal Marine Labour Corps. This particular case illustrates an error which occurred way back in the early Twenties, where the RM Divisional prefix has been moved/misinterpreted as the man's unit.

The note at the top of this article "The matters discussed in this article concern only the Naval personnel of the RND & not Army personnel attached to Naval Battalions or Royal Engineers serving with the RND Engineer Field Companies" was made with good reason.

In February 1918 the British Army reorganised its Infantry Brigades, reducing the number of battalions per Brigade from four to three. A large number of depleted battalions were disbanded & their personnel sent to make up numbers in the remaining units. The RND disbanded two battalions, the Howe & Nelson Bns., & their personnel were sent to the remaining six RND battalions, which included the 1st & 2nd Royal Marine Bns. (go to the "Database Errors" page for information on problems with the Howe & Nelson transfers to 1 & 2 RM).

The RND also received drafts from Army units both in February 1918 & in the following months. Men from Army units recorded by the Commission as died whilst attached to RND battalions were from the 2nd Bn. Royal Munster Fusiliers, the 4th, 10th, 16th, 17th & 19th Bns. Royal Welch Fusiliers, the 14th & 17th Bns. Welch Regt., the 7th & 8th Bns. South Staffs Regt., the 3rd & 11th Bn. Royal West Kents & the Middlesex Regt. However, not all Army attachments were recorded.

There are at least two Army other ranks who were serving with the RND & are listed on the Pozieres Memorial, but both were killed before 6/4/18 :-

These two casualties, Pte. Russell in particular, illustrate the fact that men serving with the RND before 6/4/18 were/are eligible for commemoration on the Pozieres Memorial.

Sgt. Lovatt, a pre-war long service Marine, began his RND service with the Chatham Battalion at Ostend, Dunkirk & Antwerp in 1914, served at Gallipoli 1915-16 & was severely wounded in France 28/8/16. He was invalided home, but recovered & rejoined the 1st RM Bn. in France 24/9/17. He was posted missing during the retreat from Cambrai 24/3/18 & later reported a POW.

It would seem the Germans were careless in misplacing Sgt. Lovatt's body/grave & his name is listed on the Arras Memorial. Naturally, we believe he should have been put on the Pozieres Memorial.

We close with an interesting Commission error ; one which cannot be omitted from an article about Pozieres.

AB Parsons was an original member of the ill fated Collingwood Battalion at Gallipoli who transferred to the Anson Bn. 8/6/15 when the Collingwood Bn. was broken up.

The Commission incorrectly record his date of death as 7/4/17 & his name is therefore listed on the Arras Memorial (correct for that date). However, as he was actually killed 7/4/18, his name should be listed on Pozieres.