Accompanying each plaque image are the details given in the "RND Roll of Honour" database compiled by us over six years & now available online at FINDMYPAST.com & ANCESTRY.co.uk.

Any information or enquiries about the Plaques shown on this site are welcome. Please e-mail us at jack.clegg@virgin.net

We would also welcome any contributions in the form of photos/scans of R.N.D. memorial plaques to add to those already here.

A NOTE TO ALL MEDAL COLLECTORS
Many of the plaques shown here are single items, i.e. no medals were issued. Contrary to popular belief, not all WW1 medals were issued automatically. Specifically the Navy, who issued only to claimants. The evidence for this lies in the Naval Medal Rolls at Kew (ADM/171), which show the late issue of medals up until around 1987 (also duplicate issues). The absence of issue details ("How Issued or disposed of") in the ADM/171 rolls indicate that no claim was made. In the case of casualty medals not claimed/issued, the absence of "How Issued or disposed of" is almost always accompanied by a pencilled note in the remarks column which gives the date the man died, with the prefix DD (e.g. "DD13.11.16").

If one accepts that this is the truth about WW1 Naval Medals, then it explains the existence of many single plaques to Naval men, to which almost all medal collectors would attribute as "Broken Groups". It is also known that many single 1914 Stars & memorial plaques to the R.N.D. exist, where there was no claim made for the British War & Victory medals (also in many cases, a single 1914 Star, RN LSGC & Memorial Plaque).

I would advise interested parties to first consult the ADM/171 medal roll entry before embarking on any search for medals which do not exist! It is my intention to construct a guide showing all the evidence to support this in due course. In the meantime, below is one page from ADM/171/167, which shows the lack of issue details to six men, five of whom were entitled to the British War Medal only (B.) & my Great Uncle, John Clegg, a 15 Trio (St.V.B.). Other notes in the remarks column are self-explanatory. 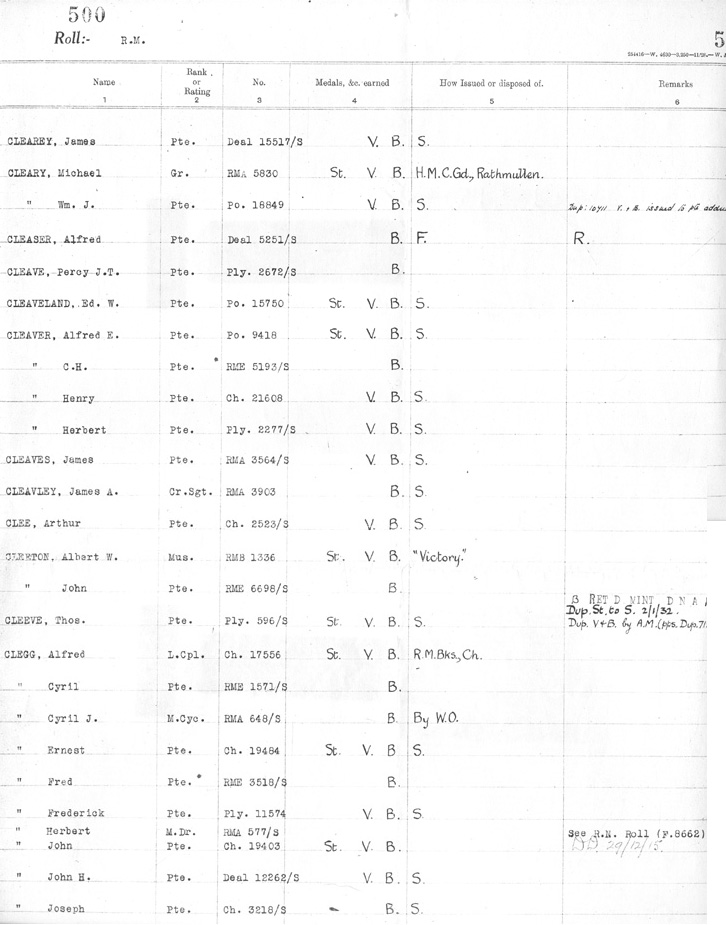